by
AleksandarK
Apr 1st, 2020 08:32 Discuss (17 Comments)
NVIDIA has enabled its AIB partners to design a to ship a GeForce GTX 1650 GPU with a twist - a GDDR6 DRAM instead of the regular GDDR5 DRAM. And GIGABYTE is the first to update its GPU offerings. Today, GIGABYTE has launched... exactly all the models it had it already offered? Both of the models, like the GIGABYTE GTX 1650 OC and GTX 1650 Windforce OC, are carrying the same name again, just with a newer memory. The only difference is the box it ships in, which you can see below, that shows a GDDR6 marking and the GPU has a bit different cooler shroud. The amount of memory is still static, remaining at 4 GB, while the speed is now bumped to 12 Gbps. Base clocks of the GTX 1650 OC models are unknown, while the boost is 1635 MHz. For GTX 1650 Windforce OC model, base clock is still unknown, while the boost is 1710 MHz.

#1
Unfortunately, this isn't a part of April fools.
#2

AleksandarKUnfortunately, this isn't a part of April fools.

_JP_C'mooooooon LP OC versioooooon!!
MSI and XFX, if you're reading, do take note and proceed in accordance, please!

XFX hasn't been making Nvidia cards for quite some time.
#6

ShurikNXFX hasn't been making Nvidia cards for quite some time.

Thank you! My bad and confusion, I meant Zotac. *Facepalm*
ZOTAAAAAAAC!!!! * POINTS FINGER *
#7

_JP_Thank you! My bad and confusion, I meant Zotac. *Facepalm*
ZOTAAAAAAAC!!!! * POINTS FINGER *

Well gigabyte has low profile gtx 1650 too, maybe they will update that with gddr6.

Edit: too bad that they could not use full fat tu117 die, could have been somewhere near to gtx1060 performance with that config.

FrickHow much did GDDR5 hold them back?

That's a good question. Some comparison benchmarks would help show the difference.
#9

lexluthermiesterThat's a good question. Some comparison benchmarks would help show the difference.

Im having no doubt a 15% performance delta over vanilla 1650 is very possible, since overclocking the current 1650's memory from 8Gbps to 9.5Gbps seem to hit very close to that number
#10
I always liked a gpu that only draws power from motherboard. There is a big market for it. Yes it will struggle to perform at 1080p at best settings.but I'm sure next gen of these cards would probably even exceed gtx 1050 super performance below 75W.
#11
@Turmania I'm pretty sure the 1650 chip handles itself rather well at 1080p, just not 1440p. Next gen might make it fluid at those settings.
About the power envelope, I agree that there is a market demand for it, be it slim chassis for the LP versions or the usual Sans-Noise where 75W do require a bulky chunk of metal, but noise is absolutely null the whole time. I'm part of that market :D
#12
I use GTX 1650 :) cheap and up to 75W TDP. I have not found even better with this TDP. Why do I use Ubuntu? Work habits. I work for 16 hours a day, that's why I'm not interested in 2080 Ti demons. DOOM Eternal runs smoothly.
See the video: 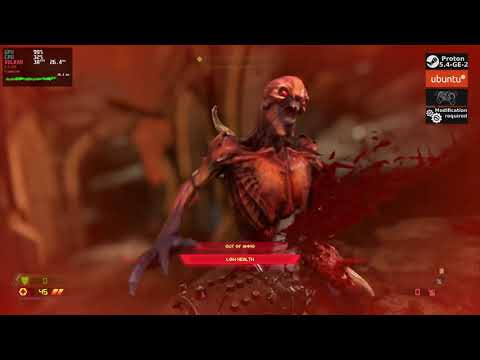 And here other games on Ubuntu how they work may interest someone:

Let TDP this new card not increase, because then it makes no sense to me.
#13
The GDDR6 model actually looks like a shorter in both height and depth. The PCB is much shorter too.

In addition, the GDDR6 model seems to gain a DVI-D port.
#14

To put it into context, it's significantly slower than the RX570 which has been around for ages and spent the majority of the last 18 months languishing in the clearance sales at $100-120. That brackets the 1650 as a $75 gaming experience and perhaps you can add a bit of extra value because it's a quieter card with lower TDP than the old RX 570.

It barely makes a case for itself against 2016's 1050Ti, which was a pretty underwhelming card itself.
#16
@EarthDog fair enough :D I define rather well at 1080p as most games, universally, do become playable as long as very advanced graphics settings aren't enabled (e.g. shadows, reflections, smoke) and a lot of games outside AAA don't employ that, so 60fps isn't that hard to reach.
#17

_JP_@EarthDog fair enough :D I define rather well at 1080p as most games, universally, do become playable as long as very advanced graphics settings aren't enabled (e.g. shadows, reflections, smoke) and a lot of games outside AAA don't employ that, so 60fps isn't that hard to reach.

My thinking..... if I wanted console-like graphics, I would buy a console. I buy PC games to run at a canned ultra setting. The 1650 cannot do that on plenty of titles. Rather-well is a glass half full take to me. :)
Add your own comment
Apr 23rd, 2021 10:11 EDT change timezone
Sign in / Register