by
btarunr
Jul 29th, 2019 02:26 Discuss (132 Comments)
AMD is developing a larger GPU based on its new "Navi" architecture to power a new high-end graphics card family, likely the Radeon RX 5800 series. The codename "Navi 12" is doing rounds on social media through familiar accounts that have high credibility with pre-launch news and rumors. The "Navi 10" silicon was designed to compete with NVIDIA's "TU106," as its "XT" and "Pro" variants outperform NVIDIA's original RTX 2060 and RTX 2070, forcing it to develop the RTX 20 Super series, by moving up specifications a notch.

Refreshing its $500 price-point was particularly costly for NVIDIA, as it was forced to tap into the 13.6 billion-transistor "TU104" silicon to carve out the RTX 2070 Super; while for the RTX 2060 Super, it had to spend 33 percent more on the memory chips. With the "Navi 12" silicon, AMD is probably looking to take a swing at NVIDIA's "TU104" silicon, which has been maxed out by the RTX 2080 Super, disrupting the company's $500-700 lineup once again, with its XT and Pro variants. There's also a remote possibility of "Navi 12" being an even bigger chip, targeting the "TU102."

HwGeek64CU Navi card can be sold for $999 for easy since it will be better then RTX 2080Ti, question is how much better should it be since in this price range the RTRT is more relevant since the 2080Ti can run games with RTX ON much better then the 2060/2070/2080.

That sounds very optimistic. On technical side of things resource allocation for RX5700 is identical to RTX2070 (36 CU/GPC) and RX5700XT is identical to RTX2070S (40 CU/GPC). These are not favourable comparisons to Navi, the strength for Navi is basically lower price and going agaist less-equipped competition. RTX2080Ti is a 68 GPC GPU. 64 CU Navi will clearly have trouble competing. 46/48 GPC RTX2080/2080S are more realistic targets.

ratirtRX 5800 might be nice but I'm a bit concerned about the power requirements. Not sure if it will be better than 2080TI just hoping it will come close. Wonder if there will be top variant 5800XT. Just like we see with 5700 models. I assume this card will also use GDDR6.

For a realistic estimate look at RTX cards - their efficiency is largely identical at the same performance level. Either way, high-end card will inevitably take the 250W TDP.

RTX2080Ti MSRP is 999$ and current street prices at least in Europe are already below that.
#7

It needs to be cheaper. Reason : ray tracing. And yes, it does matter on the 2080ti. Not on the remaining rtx line up (almost useless).
#8
As @Manu_PT says, at what power cost? Nvidia could likely remove power limiters and have hotter, hungrier, noisier cards too. But it's not what the industry wants. Everything is tending to lower power or higher performance at same power.
#9

Manu_PTIt needs to be cheaper. Reason : ray tracing. And yes, it does matter on the 2080ti. Not on the remaining rtx line up (almost useless).

I dont think it needs Ray Tracing but it has to be cheaper than 2080Ti for sure and it will be probably.
#10
@Manu_PT this is exactly what I sad too :-).
#11
"Navi 12-san"
:laugh:
#12
I guess Nvidia's response to a much bigger and stronger Navi, could be something like 1760 and 1860 GPUs without the ray tracing features. But in that case, it will become much more difficult to promote ray tracing.

Nvidia managed to shoot itself in the foot with PhysX(they would still be selling a boatload of low-mid range cards if they haven't locked it) and it could happen the same this time with ray tracing, because of the way they tried to implement it, trying to take advantage of the AI capabilities of their chips, something that resulted in much bigger much more expensive to manufacture GPUs.
#13

Navi at that price I expect nothing but HBM2.
#14

How about win7 to win10 upgrade campaign?
Japanese will personify (animefy?) just about anything :laugh:

as much as rx 5800 series may sound exciting, somehow I can smell bbq already.
especially if they reaching for that 2080ti level...
not like there is any reason whatsoever to move on from 1080ti now.
#15

LorecHow about win7 to win10 upgrade campaign?
Japanese will personify (animefy?) just about anything :laugh:

as much as rx 5800 series may sound exciting, somehow I can smell bbq already.
especially if they reaching for that 2080ti level...
not like there is any reason whatsoever to move on from 1080ti now.

Manu_PT300w incoming tho, I suspect, wich scares me

Why Manu, why are you selectively scared ? 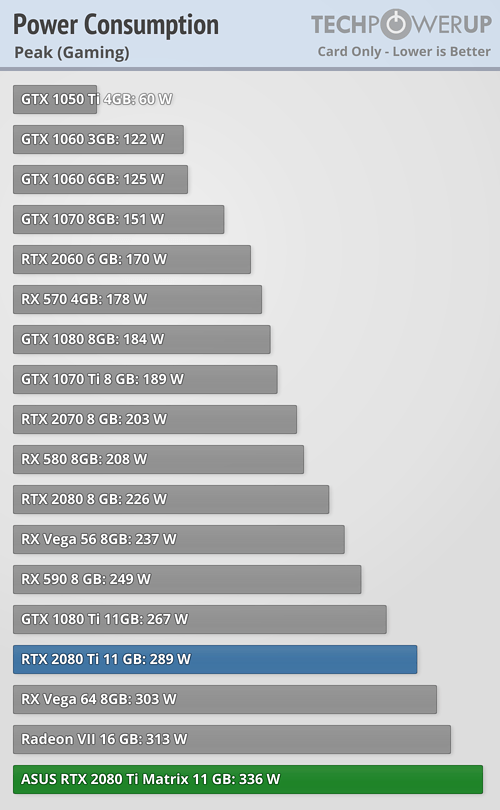 jigar2speedWhy Manu, why are you selectively scared ?

jigar2speedWhy Manu, why are you selectively scared ?

Those 300W for 2080Ti are without using the full silicon. Power consumption would be much higher with full use of Tensor and RT cores which are currently underutilized.
#24
When you have a super powerful GPU you do not care about power draw. It is not just for mining that 1000 to 1600W power supplies are on the market. I can't speak for everyone but where i live in Canada it is a maximum of .11$ per KWH. The difference between 300 and 350 watts would equate to a coffee and donut every 3 months. In terms of performance, if the 5700XT has 1/2 of the stream processors and is faster than a Vega 64 (Which is about 10-15% slower than a 2080). A Navi card with the same core count would be potentially faster than anything on the market today. I really wonder if this is the successor to Vega and will come with HBM2 memory. Or may be like the days of Tahiti with a 384 bit bus for 16GB of DDR6.
#25