The Radeon RX 5500 XT comes in two variants based on memory size, 4 GB and 8 GB. Both variants use 14 Gbps GDDR6 memory chips across the chip's 128-bit wide memory bus. The 4 GB variant uses four commonly available 8 Gbit chips, while the 8 GB variant typically uses high-density 16 Gbit memory chips. AMD is pricing the Radeon RX 5500 XT at USD $169.99 for the 4 GB variant, and $199.99 for the 8 GB variant. It competes with a spectrum of NVIDIA cards including the GeForce GTX 1650 and GTX 1650 Super.

ixi:D , better than nothing I guess...

AMD has managed to go backwards. Even Nvidia didnt do that.
#4
I like how none of the poll questions agree with the pricing.
#5

TheinsanegamerNWorse, actually. AMD's 5500xt is, on average, no faster then a 580, but costs MORE then a brand new 580 right now.

AMD has managed to go backwards. Even Nvidia didnt do that.

So what on earth are you talking about?
#6
i got this offering today whichs preorder till 18dec, not worth, the price is expensive dispute the performance

should be avaiable on $300 soon at my country, altho i get a special discount for a $40+, im not gonna buy it since performance review is bad, i thinks it neck to neck with 1650super, this time nvidia win both price&performance, not sure through oc, as amd still had potential to do so:)
#7

RowsolI like how none of the poll questions agree with the pricing.

Lol. I don't think anyone can defend that pricing. Had the 4GB card been priced at $140 and the 8GB at $160 they could have been received warmly. As has been said many times before, you don't really see bad products, just bad pricing, and this pricing is terrible.
#8

So what on earth are you talking about?

Those two seem to be in every 5500 xt thread crapping their nonsense all over the place.
#9

So what on earth are you talking about?

B-RealIt's a shame if you were not a troll.

Where did I troll, sir? Or stating inconvenient facts about the underdog is considered "trolling" nowadays? I didn't know that.
#13 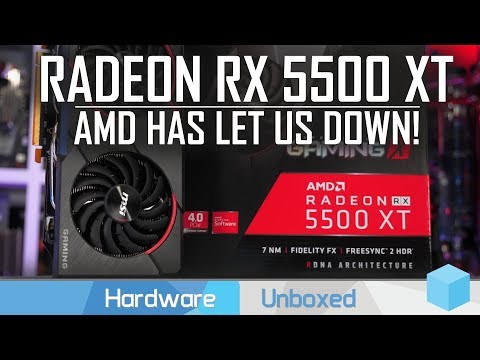 #14
For current pricing,
4GB version is fine.
8GB version is a loyalty test.
#15
So it turns out AMD are just a greedy multi-billion corp too.