by
TheLostSwede
Sep 14th, 2021 11:15 Discuss (10 Comments)
It's been a long time coming, but Sony is finally ready to allow all of its PS5 customers to get access to the M.2 SSD storage expansion slot, courtesy of the September system update, which lands tomorrow. It's not the only feature that the new update will bring though, as Sony has also worked on some user experience enhancements when it comes to navigating the UI, as well as some improvements to the PlayStation Now UI.

As for the SSD upgrade, as you may or may not know, a PCIe 4.0 SSD is required, with a minimum sequential read speed of 5,500 MB/s. This means that anything but the most recent, high-end drives might not be meeting Sony's standards. Sony has a full guide that explains the physical requirements, which you can find here. We've also added Sony's SSD upgrade video below.


Sony is also updating its PS Remote Play and PS apps, the biggest addition being that it's now possible to connect to your PlayStation via a mobile data connection and not just Wi-Fi. You do need to have a connection speed of at least 5 Mbps for this to work though, but Sony recommends at least 15 Mbps in both directions for smooth gameplay.

#1
Took them long enough.
#2
Finally! I picked a 1TB WD Black SN850 with heatsink in anticipation of this update.
#3
I don't care for the SSD upgrade. I'm more excited for the 3D audio upgrade on TV, since I never got the headphones.
#4

I guess we are going to need the 4TB size.:)
#5
yeah, i'll wait for cheap pcie4.0 ssds. My internet is fast enough that I can download any game in about 15 minutes, no need to hodl everything in local storage.
#6
So is there any backwards-compatibility for PCIe 3.0 drives? Obviously 3.0 drives wouldn't meet Sony's recommended speeds, but I can't imagine that would seriously decimate gameplay or load times
#7
M.2 for everyone?
Even people with a nintendo switch?

5,500 is recommended. Kay, nice. But wont the 4K reads/writes be what matters more?

So unless they locked it to 4.0 for some dumb reason, a quality 3.0 TLC or MLC NVME is going to smash a budet 4.0 QLC, and work just fine... they just had to pick an easy to find number for people to look for
#8

MachineLearningSo is there any backwards-compatibility for PCIe 3.0 drives? Obviously 3.0 drives wouldn't meet Sony's recommended speeds, but I can't imagine that would seriously decimate gameplay or load times

I'd be very into that at least for ps4 games but several people on youtube tested it (linus tech tips and digital foundry for example) and it doesn't work, it detects the pcie3.0 and refuses to start
#9
So after checking on youtube: 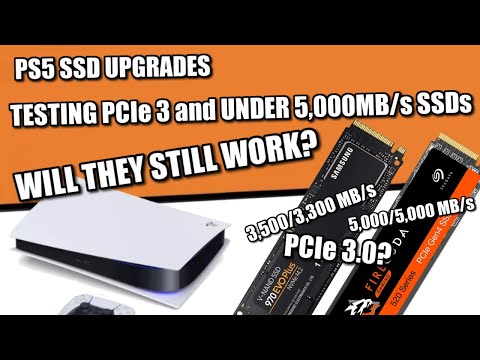 Real answer, after the seagulls interrupt: Gen 3 drives dont work, budget gen 4 drives work fine, potentially loading slower than the built in storage. It does benchmark them, need to find where someone tested one that reads slower than the recommended speeds...

PS5 SSD speed test: slower drives work - The Verge
#10
yay more suckers to peddle overpriced shitdrives to! :kookoo:
i feel like some all developers retards at sony didn't understand how storage works and which numbers are important
May 16th, 2022 07:28 EDT change timezone
Sign in / Register