[Editor's note: The information below was not part of the original press release and was added to provide more context to the story]

Illuminated Cooling
The Phanteks' Halos RGB fan frame complements any system build with ambient illumination, bringing a new dimension to the proven TC12LS. Easy to install and putting your cooler on display with 18 integrated LEDS in the Halos. The TC12LS RGB merges high performance cooling with quality integrated lighting.

Colors In Sync
With the TC12LS RGB you can daisy chain all of Phanteks' RGB products together and sync the RGB lighting with any RGB equipped Phanteks case of compatible motherboard.

Pricing and Availability
The PH-TC12LS RGB is available now with a recommended retail price of $49.99.

It can be bought with or w/o the 25mm fan so you can put on whatever you want, tho with the fan is ften cheaper. Provided fan is the "PH-F120MP PWM High Static Pressure Premium Fan" 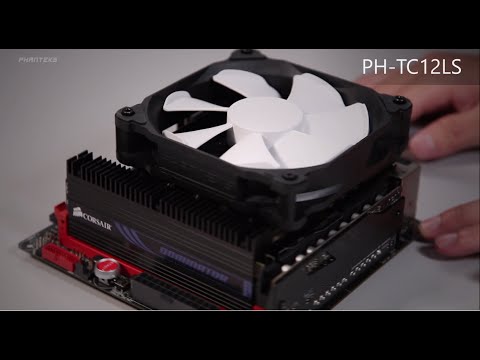 #5
Awesome thanks! I had no idea that the non RGB version existed. I've used the C1 and Pallas, but never stumbled upon the TC12LS for my SFF needs. I like the 120mm size.

It can be bought with or w/o the 25mm fan so you can put on whatever you want, tho with the fan is ften cheaper. Provided fan is the "PH-F120MP PWM High Static Pressure Premium Fan"

#6
The stock Wraith cooler from AMD outperforms this by almost 20 degrees under heavy load at over 300w, and it also has RGB integration. Not very impressive.

At least the height is a bit lower and it's also more silent by a few DBs.
#7
Please update the fans on the PH-TC12DX and PH-TC14PE as well as i have always disliked the white frame on the fans
#8

DedPxlThe stock Wraith cooler from AMD outperforms this by almost 20 degrees under heavy load at over 300w.

I was going to ask where you've read that, because the results in this review (see also the following page of it) seemed to indicate something very different:

But then I realized you were talking about 300w load, lol (the review confirms what you wrote for 340W load).
No modern CPU (that I know of) runs with 300w at load, so those +20° are a rather fictional value.
Most of them are between 60 and 100W. And in that range, the difference to the Wraith cooler (which BTW is not a throw-away stock cooler like in the old days but more like a third party cooler) is just 1,6-1,7°, which is negligible.

So to sum it up, not only are these two coolers not competing in the same league, they're not even on the same planet. ;)
Sep 29th, 2020 12:44 EDT change timezone
Sign in / Register