This NVIDIA rendition of Q2VKPT leverages NVIDIA's RTX for Vulkan to ensure all lighting, shadows, reflections, and other visual effects are ray-traced and denoised using NVIDIA's AI-accelerated denoiser. Unless it somehow scored higher-resolution texture assets from id Software, NVIDIA could also be using a GPU-accelerated upscaler to improve texture resolution. It's also possible that ambient-occlusion methods such as HBAO+ are in play to add apparent geometric detail to some of the surfaces in the game. NVIDIA hasn't made Quake II RTX public yet, although you could take the path-traced Q2VKPT for a spin. You'll need an RTX 20-series graphics card and the latest drivers.

17 Comments on Quake II Reimagined with Ray-tracing on Vulkan

#1
Good to see it here it's a old news really but at least it's posted.
#2
I saw this a couple of months ago, but not the part where;

Perhaps they added some optimization and polish? who knows.
#3

kastriotGood to see it here it's a old news really but at least it's posted.

“But what’s new with Quake II RTX compared to Q2VKPT?”, you ask. A lot. We’ve introduced

#5
So we need to go back to Quake2 levels of detail to get playable fully raytraced games.. sweet.
#6

I personally don't mind at all. It's a good excuse to revisit old games.
#7

It is not that simple. Raytracing scales differently. Q2VKPT creator said geometric complexity is not the main problem. I remember him saying in an interview that shaders (=effects) are much bigger problem when scaling.
[quote=http://brechpunkt.de/q2vkpt/"]While it is true that Quake II is a relatively old game with rather low geometric complexity]
#8
Now everything looks like plastic...
#9
I have to say this is a great showcase. Simple games we already know and can compare to.

What's not to like? They can drop the seasons, DLC and MTX along with it, ain't got time for that, gotta shoot things.
#10
Wow Quake that brings back memorys, looks good to me im up for it.
#11
While Q2VKPT ran fine on a 1080Ti, it is very noisy, obviously due to the lack of a hardware de-noiser. That's where NVidia's RTX version comes in -- it de-noises the final image, and provides dedicated acceleration for the ray tracing. They've proven their point here, that you need specialized hardware (RTX) to get a complete final image in real-time.
#12
Ah Q2, I made over a dozen MP levels for that game, and who knows how many hours I spent fragging. There was actually an updated texture pack made for the DM 1-8 levels, so I would be curious to see how those would look with the RT engine.
#13

Well it's same thing developed further with cooperation between Nvidia and original author. And where to heck you would need HBAO+, when you have RT GI :laugh: Makes no sense what so ever.

TartarosI personally don't mind at all. It's a good excuse to revisit old games.

Yeah, I don't mind either. Would love to see someone do RTCW the same.
#14
love it, do this with all early 3d games pls.
#15
Seriously, I want Quake 1 re-done with this. And to include the 4K textures and high poly mods too please.
#16
Digging this up a few days later.... The videos here kind of annoyed me, seems more like they ruined Quake 2 somehow. 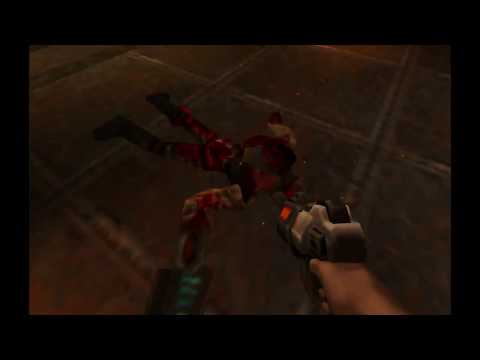 Prima.VeraSeriously, I want Quake 1 re-done with this. And to include the 4K textures and high poly mods too please.

That's the best thing about ID software games, this is not some wishful thinking and surely someone is on it atm. I haven't played Hexen 2, might go directly to this.
Add your own comment
Feb 19th, 2020 08:08 EST change timezone
Sign in / Register