by
btarunr
May 31st, 2019 15:15 Discuss (14 Comments)
Motherboard vendors are betting big on the success of AMD's "Valhalla" desktop platform that combines a Ryzen 3000-series Zen 2 processor with an AMD X570 chipset motherboard, and have responded with some mighty premium board designs. GIGABYTE deployed its full spectrum of Aorus branding, including Ultra, Elite, ITX Pro, Master, and Xtreme. The X570 I Aorus Pro WiFi mini-ITX motherboard is an impressive feat of engineering despite its designers having to wrestle with the feisty new PCIe gen 4 chipset. It draws power from a combination of 24-pin and 8-pin connectors, and conditions power for the SoC with an impressive 8-phase VRM that uses high-grade PowIRstage components. A rather tall fan-heatsink cools the X570 chipset, with a 30 mm fan.

Connectivity options on the X570 I Aorus Pro WiFi are surprisingly aplenty. The sole expansion slot is a PCI-Express 4.0 x16, but the storage connectivity includes not one, but two M.2-2280 slots (reverse side of the PCB), each with PCI-Express 4.0 x4 and SATA 6 Gbps wiring. Four SATA 6 Gbps ports make for the rest of the storage connectivity. Networking options include 2.4 Gbps 802.11ax WLAN, Bluetooth 5.0 (Intel , and 1 GbE, all pulled by Intel-made controllers. USB connectivity includes six 5 Gbps USB 3.2 gen 1, and two 10 Gbps USB 3.2 gen 2 ports (of which one is type-C), and two 5 Gbps ports by headers. The onboard audio solution has 6-channel analog output, but is backed by a premium Realtek ALC1220VB Enhance CODEC (114 dBA SNR).

The X570 Aorus Elite is the most affordable X570 ATX board on display. It draws power from a combination of 24-pin and a single 8-pin EPS power connectors, conditioning it for the CPU with a 14-phase VRM. You still get some decent features such as two M.2 slots, both with PCI-Express 4.0 x4 wiring, one PCI-Express 4.0 x16 slot (the second one is gen 4.0 x4 and wired to the chipset), a rather premium onboard audio solution with ALC1220VB-Enhance CODEC; and 1 GbE driven by an Intel i211-AT controller.

The X570 Aorus Pro (ATX) is positioned a notch above the X570 Aorus Elite. This board has a stronger CPU VRM solution that draws power from a combination of 24-pin ATX, 8-pin EPS, and an additional 4-pin ATX. It's still 14-phase, but with higher capacity chokes and PowIRstage driver-MOSFETs, not to mention a more powerful aluminium fin-stack heatsink over the main phases. The board is multi-GPU ready, with the top PCI-Express 4.0 x16 slot being able to share 8 of its lanes with the second slot, and support for NVIDIA SLI/NVLink, and CrossFireX. Both of the board's M.2 slots come with heatsinks. The onboard audio now comes with dual headphones amplifier, and networking option is the same as the X570 Aorus Elite.

The X570 Aorus Ultra belongs to that class of $200-ish motherboards such as the MSI Gaming Pro Carbon, which appeals to gamers who just want a high-end turnkey solution without having to drop in too much manual overclocking. It's based on the same exact PCB as the X570 Aorus Pro, including the same CPU VRM solution, but with a few premium bits that include 802.11ax WLAN + BT 5.0, a fin-stack heatsink over even the vSOC portion of the CPU VRM, a rear-I/O shroud that runs the entire length of the board, covering even the onboard audio solution; a more premium-looking chipset heatsink with a concealed fan; and a third M.2-2280 slot with its own heatsink.

The X570 Aorus Master is where things get pretty serious. The CPU VRM is still 14-phase, but pulls power from two 8-pin EPS connectors, uses a super-expensive VRM controller supplied by Infineon marshaling PowIRstages, and fin-stack heatinks all around. Among the long slots are three PCI-Express 4.0 x16 (x16/NC/x4 or x8/x8/x4), with the third slot being wired to the X570 chipset. You get three M.2 slots with PCIe gen 4.0 x4 wiring. The onboard audio solution is a top-of-the-line ESS Sabre fare with 125 dBA SNR, and user-replaceable OPAMPs. Networking includes 802.11ax WLAN, Bluetooth 5.0, 2.5 GbE driven by a Realtek controller, and a 1 GbE driven by an Intel i211-AT. You also get a much larger selection of overclocking options.

The lineup doesn't end with the Aorus Master. That honor goes to the X570 Aorus Xtreme. This board is an absolute unit, featuring a 16-phase VRM that uses an expensive Infineon VRM controller, PowIRstages, and extremely high current chokes, while pulling power from two 8-pin EPS connectors. A metal shroud covers most parts of the board. The X570 chipset is passively cooled with a massive heatsink that sheds some of its heat onto the VRM heatsinks, the three M.2 SSD heatsinks, and a rear metal plate. Networking includes 802.11ax + BT5.0, one 10 GbE interface pulled by an Aquantia-made controller, and a second 1 GbE backed by an Intel i211-AT. The onboard audio solution is a tiny bit more premium than the Aorus Master, with a 130 dBA SNR variant of the ESS Sabre DAC. A trasure-trove of overclocker-friendly options make for the rest of it.

#1
Holy crap, actual fins and heatpipes on a motherboard, finally. I mean ot probably costs an arm and a leg, but still.
#2
Is It just the angle of the picture or is the PCIe slot completely inaccessible because of the chipset shroud on the ITX board?
#3
I'm annoyed by the fact that the one with actual useful heatpipe/sink also features a massive useless shroud over the components.
#4
www.gigabyte.com/Motherboard/X570-AORUS-MASTER-rev-10

gigabyte is very serious about Ryzen 3000!

BlueberriesIs It just the angle of the picture or is the PCIe slot completely inaccessible because of the chipset shroud on the ITX board?

Of course it's the angle of the image... *facepalm*
#7
I like that MITX board, the lineup looks pretty good!
#8

GhostRyderI like that MITX board, the lineup looks pretty good!

Thanks, added. I missed it because the Ultra is 95% identical to the Pro, with just a few added premium bits and an additional M.2 slot.
#10
The last one has my name all over it. :laugh: I bet by the time i come back from UK, these will be at local store shelves. Selling my current PC will (probably) cover half of expenses. How much for Xtreme, 499$? 599$? I ask, cause the Intel one i want to buy (Z390 Xtreme) is south of 500$ here (incl. taxes & such).
#11
Rally wanted a Gigabyte board for my X570 build but Gigabyte together with MSI has decided not to have a single board anywhere in their lineup with x8 SATA ports

TheMadDutchDudeOf course it's the angle of the image... *facepalm*

I found another angle 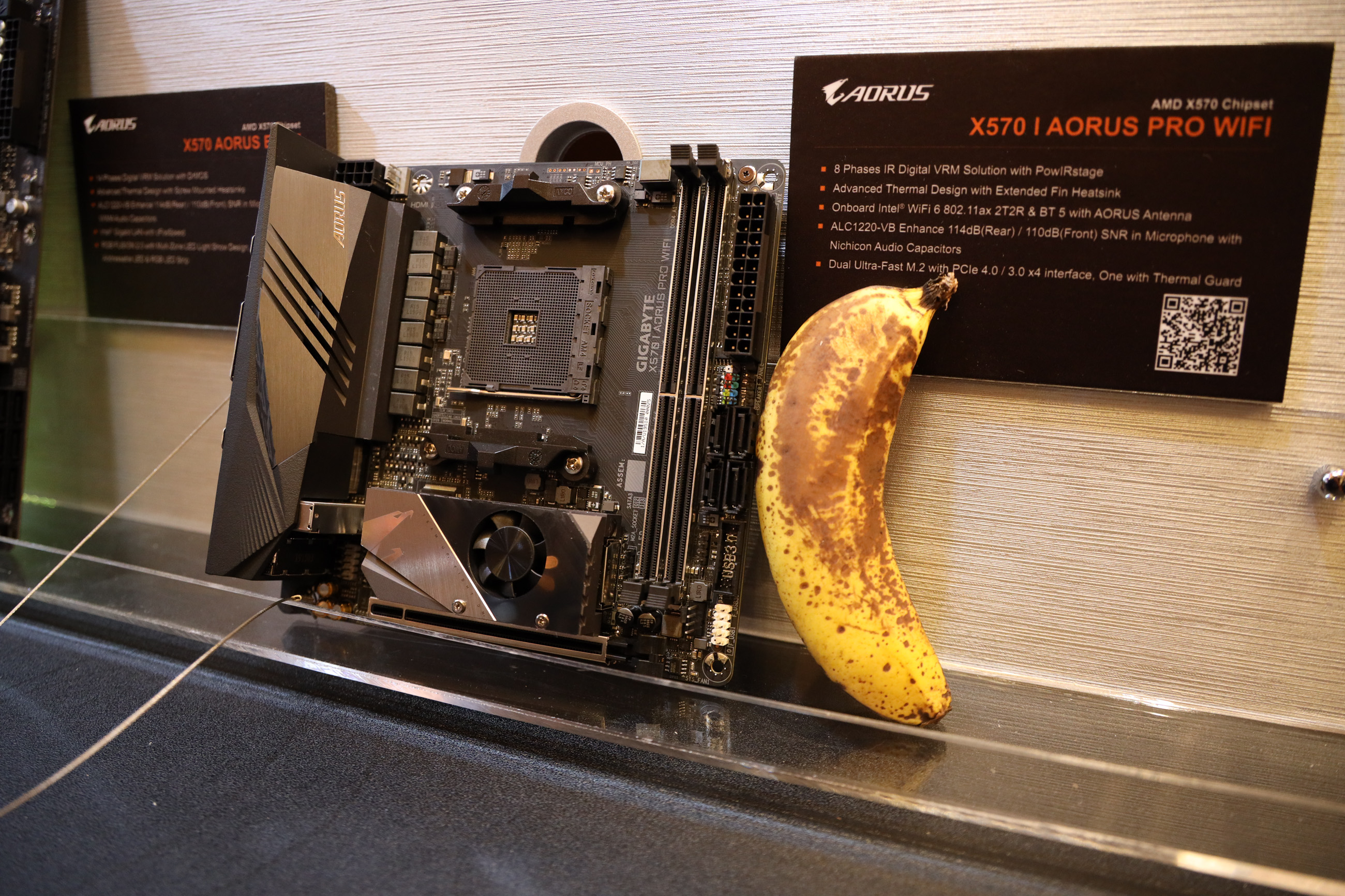 Might be an issue if your PCIe device has a thick backplate.
#13
Talk about overkill. Not only do they throw in a banana jack - they use a real banana.
#14
So the Elite has only 6 rear USB ports? What decade is this again?

btarunrThanks, added. I missed it because the Ultra is 95% identical to the Pro, with just a few added premium bits and an additional M.2 slot.

I figured as much.

BTW the layout of the article and pictures is pretty confusing. It would be much better if you had the description of the board, then the pictures of its layout + rear IO, then the next board description, etc.
Add your own comment
May 31st, 2020 20:03 EDT change timezone
Sign in / Register