by
malware
Jan 18th, 2009 10:47 Discuss (74 Comments)
Seagate has issued an official statement today, acknowledging all recent problems with some Barracuda 7200.11 drives. Based on the information posted in the company's forums here, select Seagate Barracuda 7200.11 1TB 3.5-inch hard drives made in Thailand, suffer from a firmware issue that bricks the HDDs after a short period of time. After three to five months of normal operation these defective hard drives will suddenly lock-up as a protective measure and prevent the system from recognizing the drive from then onwards. In most cases the information won't be lost, but the drive will be completely useless, changing the drive's electronics won't help much either. This problem occurs not only to the 1TB Barracuda models, but to Seagate 1.5TB, 640GB, 500GB, 320GB and 160GB Barracuda 7200.11 drives, along with some Maxtor and ES.2 models. That's pretty disturbing, but now Seagate will provide its customers with an updated firmware if their drive is problematic.

Here's the full statement from the company's spokesman Mike Hall:

Seagate has isolated a potential firmware issue in certain products, including some Barracuda 7200.11 hard drives and related drive families based on this product platform, manufactured through December 2008. In some circumstances, the data on the hard drives may become inaccessible to the user when the host system is powered on*.
As part of our commitment to customer satisfaction, we are offering a free firmware upgrade to those with affected products. To determine whether your product is affected, please visit the Seagate Support web site at http://seagate.custkb.com/seagate/crm/selfservice/search.jsp?DocId=207931.

Customers can expedite assistance by sending an email to Seagate (discsupport@seagate.com). Please include the following disk drive information: model number, serial number and current firmware revision. We will respond, promptly, to your email request with appropriate instructions. There is no data loss associated with this issue, and the data still resides on the drive. But if you are unable to access your data due to this issue, Seagate will provide free data recovery services. Seagate will work with you to expedite a remedy to minimize any disruption to you or your business.

*There is no safety issue with these products.

The following are potentially affected models: 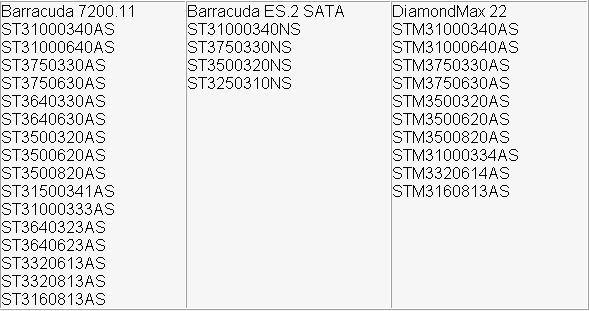 It is important however to use the online serial number validation tool to verify whether or not your specific drive is affected as not all drives of the same model necessarily share the same firmware revision. Source: The Tech Report

#1
I would like to thank our forum member wiak for this story.
#2
I'm glad I've been going to Western Digital for my 1Tb drives and 500Gb. We haven't seen this issue at work but reading reviews on Newegg about the 1.5Tb issues scared me enough to go to the W.D. side.
#3
This has been a known issue with the 1.5TB and 1TB drives for a while. Basically, if you have firmware SD19 or lower, you are affected. I fought this issue for about a week, with drives dropping out of the RAID array at least once a day, requiring the machine to be powered off, and a lot of hope that the drive would come back and the array would finish a rebuild.

After RMAing one drive, I found out about the firmware issue. I emailed seagate about the issue, and it took them over 2 weeks to finally email me back with the firmware fix. Which I applied to the other two drives without issue.

Just FYI for those that need the firmware update. I had to remove the drive from my dedicated RAID controller and connect it to the onboard SATA controller. The firmware updater would not detect the drives when they were connected to my RAID controller. This wasn't in the included Seagate documentation. I was kind of annoyed by the updater not detecting the drives, after Seagate took so long to respond, they sent me an updater that didn't work...but then I switch the drives over and it worked on the onboard controller. No data was lost doing this though, I didn't even have to rebuild the array.
#4
Many retailers are selling these potentially troubled drives for cheap. I saw a Seagate 1.5TB drive on TigerDirect for around $100 the other day. They are dumping them. This is going to do some serious damage to Seagate in their distribution channel.

Personally I haven't bought a Seagate drive in 5+ years and when I heard they were buying Maxtor a while back I knew their quality would suffer. I've been buying WD almost exclusively since 2004. Samsung seems okay too. Not a single WD or Samsung failure so far.
#5
shit my drive is afected and i have no idea on what to do thier site is confusing and i dont know how to get the frimware
#6

Looks like there are two methods. You can call them @ 1-800-SEAGATE (1 800 732-4283) and give them either/both the Part Number and Serial Number so they can properly assist you. The other method is by email here,http://www.seagate.com/www/en-us/about/contact_us/ and select Technical support, and again you must give them the part number and serial number.

There are two ways to get the Part and Serial number. Pull the drive out and you should see a P/N and S/N, this is what you are looking for. The other method is to boot from a Seatools CD, the one for DOS http://www.seagate.com/www/en-us/support/downloads/seatools, and it will list the part number and serial number.
#7
I wonder how many customers are able to do this firmware update
#8

I wonder how many of these drives are sitting in various HP/Dell/Gateway crap-boxes all over the world while their owners go about their business oblivious to any potential trouble.
#9
I have a 640gig version, firmware SD13, but using my serial on seagates website says its not affected, but then again I think my drive was made in China. I miss the drives that used to be made in Korea, they seemed to have better quality control. Capatilism, greed, and the almighty dollor ftl.

I would gladly pay an extra 20 bucks for a drive that goes through more stringent QC.

Oh well, so far so good for this 640gb, hopefully the firmware fixes all these issues for everyone.

edit* PCWizard can be used to find the HDD serial and FW #'s
#10
well thier site is not working well i have made 2 diff logins allready and each time it says that my login is wrong "Your login attempt has failed. The username or password may be incorrect, or your location or login time may be restricted. Please contact the administrator at your company for help." so im kinda pissed i gess im going to have to call them thats going to take for ever. so their no other way of geting this frimware update?
#11
where can ig et one of these for dirt cheap?
#12
Thank you Seagate - I have already lost 1Tb as a result of my loyalty to your product - Thank you for taking my initial technical reports posted to your official forums SO very seriously almost 6 Months ago when my first drive simply "Died" - And a VERY SPECIAL thank you for then deleting my (and many others) thread so that thousands of others could also suffer similar losses.

Thank you for simply doing nothing about this for as long as you possibly could, and completely refusing to cooperate in any way with anyone trying to develop their own fix for what we had already identified to be a flaw in your firmware.

Thank you for caring so very much about your customers.

Lets hope the whole world learns a lesson from your fanatical dedication to customer service & support...

Anyone know where to get a newer firmware?

Iv had the drive since the new year and has large amounts of university stuff on, looks like ill be spending time backing up!
#14
Says mines is not affected, but does it really matter, i haven't had trouble with it at all, and it was bought before DEC 08.

Only people that need to worry are the people who recently bought one.
#15
I also have a WD Caviar SE SATA drive 160GB, that two has been working well. I do prefer WD and my OS was originally installed on the WD HDD but i went to reinstall and it installed on the Seagate, no problems tho has been working well for some time now.:)
#16
I wonder if now would be a good time to get one of those 1.5tb drives. Right now they're a little over a hundred and might drop even further with the 7200.12 release
#17
damn it!!
all i have are .11 drives 2x 500 + 2 x320...
It comes a little late one of the 320 died on me probably because of that i contacted support and got a reply like 2 weeks latter when i had already sent my drive back for replacement, but they wouldn't be able to help at all as they didnt have any fix for the problem at the time, and so i got my drive back...

Now im moving on to all western digital black edition newest edition before any other one dies on me, and maybe ill see if i can change their firmware after i back them up...
#18
Well I have the affected drive.

seagate st3500320as I have tried to contact them for I only have about 4 months left I also have 9 other hdd seagates but this are old,when I went to log in to get support, which actually wrote down all the info about registration just in case, guess what I had to re-register because I was non existent as register seagate customer. I have e-mail them and no response tried 7 times woopii and there online support nothing usefull to help,they recommend not updating the firmware cause ti might render the hdd useless it seems there not really moving fast enogh ones this is resolved no more seagate I have bought junk from them.it stinks to high heaven.:slap::slap:
#19
Me no more seagate, western digital is finally picking up on the speed and technology side, they might be slight more expensive but they are the best...
#20
OMG one of my brother's 500 GB HDD suffers from exactly this and it just happened this week. :eek: What are the chances? It's like Divine Intervention, just when we need it: we were going to talk to the store tomorrow to know if they could fix the problem, as no recovery program can detect the drive and if they couldn't help (most probably anyway, although they do have some labs), then contact seagate. Hearing this news just made me soo happy. I hope we can recover all the info, he had some important recordings he made there...
#21
Ok just got off the phone with them and she said that by tuesday I will received an e-mail in how to go about fixing this issues of mmammmoth size head trauma and told her about the issue of how I had to re-register again.
#22
Already had one brick on me, but the company would only do a direct replacement. So I'm sitting here using another one right now. Hope this one is ok/updates ok!!
#23
yea I know how you feel but at this moment this pc that I am using is the one with the seagate issues I am with you on that,but I did back up this here system on another hdd that I put away just in case all would not be well.seagate said that tuesday i would received instruction on what to do.I wonder that is why I had to activates windows again about 2 months ago after !!!!!!!!!!!.
#24
by the way I am planning of byuing that intelQ660 CPU i HAVE READ GOOD REVIEWS ON IT,great set you have there.
#25
Did anyone find out what are the affected (and fixed) FW revisions?
Add your own comment
Feb 17th, 2020 10:35 EST change timezone
Sign in / Register