by
Raevenlord
Jul 12th, 2017 05:12 Discuss (159 Comments)
So, yes, Intel, I think the AMD engineers who have developed the Zen architecture from the ground-up would take issue with that. Especially when AMD's "Glued-together" dies actually wipe the proverbial floor with the blue company's chips in power-performance ratios, and deliver much better multi-threaded performance than Intel's offerings. Not bad for a "Glued-together" solution, I'd say.

Our resident W1zzard had this to say regarding AMD's latest CPUs: "The SenseMi power-management system seems to be working well in idle, with the 8-core machine drawing the same amount of power as Intel's quad-core "Kaby Lake" machine." And "At stock speeds, the energy-efficiency of Ryzen is truly phenomenal. Prime95 loads all cores and threads on the chip, and the Ryzen ends up with as much power draw as the quad-core Intel i7-7700K. The high power draw result of the overclocked chip is due to the increased voltage needed to achieve stable operation." And let's not forget this: This is epic. We're assuming you've sifted through our game-test results before seeing this page, and so you'll find that the gaming power draw of the 8-core Ryzen makes Intel's quad-core i7-7700K look bad. Power draw is as much as 30W lesser! Ryzen is hands down the most energy-efficient performance CPU AMD ever made, and easily outclasses Intel's 14 nm "leadership." Good show."

On SMT implementation between AMD's SMT and Intel's HT, Intel is basically comparing a $2,200 8-core Xeon to AMD's usually $499 Ryzen 7 1800X. They are correct in terms of core parity there, at least, but I think it goes more against Intel's customer fleecing in core/price ratios than anything else. And it's certainly a coincidence that for Intel to achieve these SMT implementation scaling numbers, which paints them in good light, they had to down-clock the Ryzen 1800X to 2.2 GHz. So, yes. Even though independent review sites have put AMD's EPYC 7601 SMT-powered improvement in various workloads at a 24% average improvement, and Intel's Xeon 8176 falls short of that at 19.58% (even rounding AMD's score down and Intel's up, that's still how big the gap is.)

Here, Intel is comparing their server-grade processors with AMD's Ryzen, desktop processors gaming woes, which really, is one of the best examples of comparing apples to oranges that I've seen in a long time. So AMD's server platform will require optimizations as well because Ryzen did, for incomparably different workloads? History does inform the future, but not to the extent that Intel is putting it here to, certainly. Putting things in the same perspective, is Intel saying that their Xeon ecosystem sees gaming-specific optimizations?

Ah, the "Glued-together" dies. Let's forget how AMD's Zen cores actually look like they were architected from the get-go for modularity and scaling, which has allowed the company to keep die-sizes to a minimum and yields to a maximum. This means that from a same-sized wafer, AMD can make more Ryzen/EPYC processors (because yes, that's the beauty of it, they're almost interchangeable), and in all likelihood, have more of those full-fledged dies without any defects that affect yields.

This is one of the reasons why AMD is able to offer an unlocked, true 8-core, 16-thread CPU in the Ryzen 7 1700 at less than Intel's 4-core, 8-thread i7 7700K (which consumes more power) - but also because AMD is democratizing access to cores while Intel maximized profits at the consumer's cost for almost a decade. And Infinity Fabric, which AMD also has implemented in their Vega architecture and will probably be used for the company's Zen-based APUs and next-gen Navi graphics architecture, is only glue. Intel would certainly like to be so lucky, since AMD's Infinity Fabric actually delivers more bandwidth than their UPI (Ultra Path Interconnect.)

Here, Intel are telling us how much better for the customer it is to be hard-locked to Intel's ecosystem for virtualization, since "VMs running on Intel Xeon processor compute pools can only live migrate to other Intel VM Pools". It's like they're saying "just imagine the amount of work you'll have to migrate these to AMD. Better remain with us."

Update: As some users pointed out, I used Ryzen 7 1800X power consumption figures as an example, instead of EPYC (those pictures are right here now.)

However, I consider that Intel themselves opened that door when they compared their Xeon, $2,200 offering with AMD's sub $499 Ryzen 7 1800X, which isn't a server CPU (and they down-clocked it to boot, let's not forget that.) That said, for comparison and fairness purposes, I'll just leave these here, courtesy of Anandtech, comparing dual Xeon systems (E5-2699 and the new Xeon 8176) with a dual EPYC 7601 system:

And maximum power consumption on the same application:

Check the full press slides in the source. There's an interesting read there, even if there are those chuckle-worthy Intel comments that look like grappling at straws when real arguments are absent. But hey, that's this editor's interpretation. I reserve myself the right to be wrong, and to be slightly emotional at these underhanded tactics. It's just plain disrespectful for a company which stands on its engineers' shoulders to deride another's with no compelling argument.
Sources: Computerbase.de, Reddit, AnandTech SMT Integer Performance

Oh, and those glued together dies kicked Xeons ass in the price/performance and power.
#2
Engaging damage limitation mode regarding the power-draw of over-clocked Skylake-X?

.... or just worried that Threadripper will let AMD further eat into Intel's profits....?
#3
Intel is doing a great job losing me as a customer. Even regardless of the performance they can offer for my purposes.

This is so much fail, it destroys my confidence completely. Somebody needs to go back to the drawing board.
#4

Oh, and those glued together dies kicked Xeons ass in the price/performance and power.

fun times ahead if intel is already starting to throw mud :lol:
#5
This is actually quite disgraceful. Intel used to be very good at marketing, but this is just low. They should stick to what they used to be good at, highlighting their own advantages, now throw FUD around.

It also makes Intel's marketing department look really scared, as if this is their best selling arguments, then they have nothing to counter with. Hopefully Intel's customers sees through this and makes them eat humble pie for it.
#6
Glued together? That's the point dipshits. It's why Amds highest core part is literally half the price (and more cores) than yours.

Sigh
#7
This the most EPYC LoL from intel ads so far..

Desperate ?
#8
Wow, these slides read like some rabid fanboy wrote/made them and then you realize they are coming from Intel no less. And I thought AMD's marketing team was bad.
#9
Intel are also refering to EPYC as being desktop dies used for server, but as I understand it Ryzen is actually server dies used for desktop as the whole eco-system was created with the server market in mind.
#10
The irony when much of their own X299 cpus simply glue a Skylake/Kaby lake cpu to a 1151-to-2066 pins adapter.
#11
Adults made this? WTF Intel :kookoo:
#12
What is that BS about gaming power consumption of Ryzen??? Of course it has lower power consumption because of the limits of the Ryzen architecture it can't be properly utilized and provides sub par performance to an "only" 4 core chip...Actually Ryzen's single core performance is sh..t and a lot of applications still relies on lightly threaded performance where high single core performance is needed. Overclockability of Ryzen is mostly presented as 4 GHz as a matter of course, but that's not the case, lot of Ryzens are really rubbish binned and some can't even do 3.8 GHz.
#13
They'd have been better off not saying anything. It reeks of desperation in a time when I still don't feel the situation warrants it.

Even on fumes, they can coast to victory for a while... especially long enough to get to a point where they deliver obviously superior products.

Or, I don't know, they can just drop pricing. I suppose if they're desperate, that's probably the reason. Some executive's bonus is on the line if they have to drop pricing by even 5% more...
#14
The fact that AMD got back in Intel's slides is a huge win for AMD.
#15
The reason intel is using such retarded slides, is basically because it is not targeted at people like you and me.

Think about the target of this whole presentation( people who are making decisions and signing contracts). With an awareness level close to "no clue" about whole AMD/intel thing, when intel tells them "glued-together" believe me that will have some psychological effects on them.

This is rather really dirty and dangerous marketing from Intel.
#16
All I can see is Intel being butthurt that AMD created an architecture where they can just stitch together bunch of cheap ass cores and go against Intel's offerings.

Also that BS about eco system. hey Intel, how about you stop purposely nerfing anything that isn't "GenuineIntel" when compiling binaries with your stupid compiler?
#17
Did someone show the Kaby Lake X cpus to whoever made that slide? :kookoo:
#18

idxThe reason intel is using such retarded slides, is basically because it is not targeted at people like you and me.

Think about the target of this whole presentation( people who are making decisions and signing contracts). With an awareness level close to "no clue" about whole AMD/intel thing, when intel tells them "glued-together" believe me that will have some psychological effects on them.

This is rather really dirty and dangerous marketing from Intel.

I think most people behind systems using Xeon processors, hopefully Epyc also in the near future, know much more than us about processors and stuff. Much much more.
#19

ChaitanyaDid someone show the Kaby Lake X cpus to whoever made that slide? :kookoo:

LOL... Reminds me of the old Overdrive sockets. 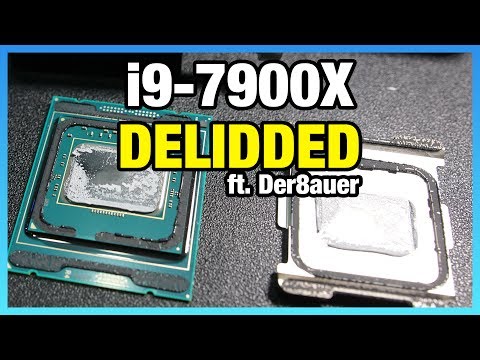 #20
Just another nail for your coffin Intel reminds me of the old I'm a PC I'm a Mac ads
#21
actually I don't really care on what magic behind the 'glued CPU' is
if it has perf/cost better on 'glued together' than your CPU, then I'll take it rather than your gigantic piece of silicon which
consume more power, pricier, with subtle difference of performance

oh, and you start to leveraging your ecosystem, when you start to lose competitive advantage in ACTUAL product ?
#22
Holy... Intel is so desperate. This is so unprofessional to have such a thing on the sliders, dude... no words LOL

Now, I reckon AMD isn´t all that great like some guys here say. I mean, for 144hz e-sports gaming, z270 platform and 7700k completly rapes any AMD Ryzen offer right now; but Intel is showing signs of concern and this is totally unaceptable.
#23
The Intel fanboi's are making a mad dash to come up with something explainable to offset this humiliation by AMD. The even poorer excuses by Intel trying to come up with a rushed marketing plan that works needs even more help since they are doing more damage than good, something AMD is quite familiar with doing.
#24
Pretty sure someone at Intel was just desperate. This is just starting, AMD has not come out with their Version 2 Ryzen.

Also, you know you`re doing the right thing when competition trash talks you instead of showing performance numbers
#25

jigar2speedPretty sure someone at Intel was just desperate. This is just starting, AMD has not come out with their Version 2 Ryzen.