by
VSG
Aug 22nd, 2020 03:15 Discuss (183 Comments)
The rumor mill has no weekend break, and it churned out photos of what appears to be an NVIDIA Founders Edition version of the upcoming GeForce RTX 3090 next to the equivalent FE RTX 2080, with the latter looking like a toy compared to the massive triple slotter. The cooler comprises of the same design we discussed in detail in June, with the unique obverse dual-fan + aluminium heatsink seen in the images below. We also covered alleged PCB photos, in case you missed them before, and all lines up with the most recent leaks. The only difference here is that pricing for the RTX 3090 FE is claimed to be $1400, a far cry from the $2000 mark we saw for certain aftermarket offerings in the makings, and yet significantly higher from the previous generation- a worrying trend that we eagerly await to see justified with performance, before we even get into case compatibility concerns with the increased length here. Either way, if the images below are accurate, we are equally curious about the cooling capability and how it affects partner solutions and pricing.

kingsSLI/Crossfire, even in its bright days, has always had a lot of problems with support, it is very dependent on the drivers for each game and the goodwill of game developers.

Then there was the problem of poor scalability. Adding a second GPU, at best, could bring 40% or 50% more performance, but mostly it was well below that. That is, you paid for a GPU to have half or 1/3 the performance of it, depending on the game. And it got worse, the more GPUs we put in.

There could be rares cases where it paid off, but as a general rule, after a few years, it was better to sell the card and buy one of the new generation, avoiding a lot of hassle. Not to mention the heat, noise and power consumption that SLI/Crossfire usually caused. Often, the GPU that was on top was constantly throttling due to not having room to breathe, further decreasing the performance gain.

I don't think it has anything to do with the price of the RTX 2080Ti, Nvidia started to follow this path long before that, for example, the GTX 1060 in 2016 no longer had support for this. AMD did not embark on cards over $1000 and also abandoned dual-GPU.

Dude, you really have NO IDEA about SLI, don't you? Where are you getting those numbers? 40-50%? That happened when it first came back with PCIe. By the time we got to the GTX 780 and R9 290x the improvements were in the 90-100% range. Not only that, what you say about temperatures and sound? totally wrong. Why? Because you rarely had to go 100% in both cards, unlike when you have one card and you have to squeeze all the power from them. Yep, they consume more power, but that's about it.
I have used SLI and CFX quite a few times. I had a CFX of 4870, then of GTX 480, and then for R9 290x. Heck, my MSI GT80 still has a SLI of GTX980m.
Of course, the games that to properly implement SLI and CFX, if you, there was little to no gain, and that is what happened. If the card makers aren't pushing dual (or triple, quadruple even) configurations any more, game companies will not support them.
#127
Given the size of the cooler, I wonder how hot will the RTX 3xxx series run. Despite the use of a newer fab (unknown at this point but surely better than 12nm), the power requirement is still shooting through the roof. I feel Nvidia went ultra aggressive to cram in as much as they can. I suspect most of the die space to be taken up by RT, Tensor and whatever bespoke cores they are going to add in there.

Ultimately, the one with the best value to performance will still be the hottest selling card. Cards like the XX80Ti are not meant for most people, whether it is due to their requirements or budget.

silkstoneI wonder if there are any ITX cases that are big enough to fit this beast.

BlueberriesI've been craving another power monster since the 295x2.

BlueberriesI've been craving another power monster since the 295x2.

Ah yes the $1500 face melting water cooled beast! The persuit of performance was fun back then, now people just like to get upset about things they don't intend on buying anyway.
#132

Ultimately, the one with the best value to performance will still be the hottest selling card. Cards like the XX80Ti are not meant for most people, whether it is due to their requirements or budget.

I think size would be the biggest limiting factor. There are plenty of ITX cases that allow the GPU to draw fresh air through the side panel, that heat isn't an issue.
I've seen small builds using threadrippers and those things can pump out some real heat.
#133

FluffmeisterAh yes the $1500 face melting water cooled beast! The persuit of performance was fun back then, now people just like to get upset about things they don't intend on buying anyway.

Though I have to give a credit that AMD managed to cool it with just an 120mm AIO. :eek:

That truly was a beast, I had a R9 290 CF year ago and when CF worked, it scaled pretty nice. But I kinda understand why SLI/CF is kinda yesterday's thing.
#134

FreedomEclipseand then there are pictures of coolers with a 'shroud' on and off... 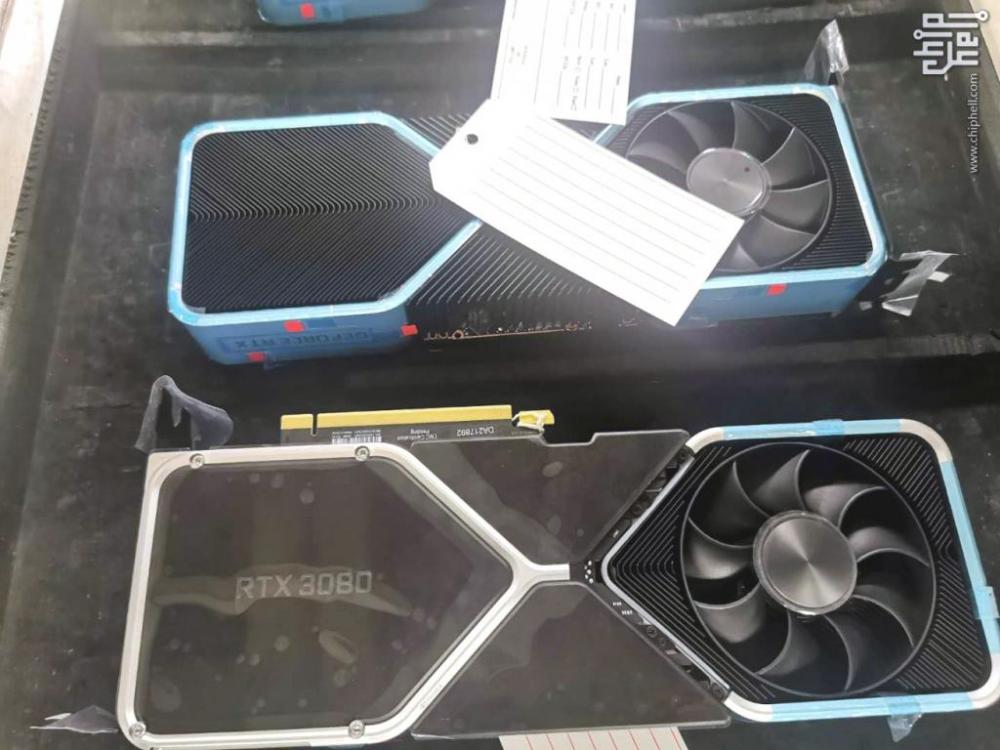 That is the rear of the card, what you're looking at is the backplate. Look at the position of the PCIe slot and I/O bracket. The PCB is obviously behind there, so it's not like it's blocking any airflow. Entirely agree with the rest of the post though.

XaledAre you focking serious? 1060 is THREE years older than 16xx's. In old days you could've get 100% performance for same price in such period.

While you're not entirely wrong, that is also the ever increasing reality of chipmaking - as time passes, the generational gains shrink. As production nodes near various physical limits, they become more expensive and difficult to make, making bigger chips expensive and low yielding. As the number of GPU cores increases, memory bandwidth is ever more of a bottleneck. As is the rest of the system (hence why the new consoles are NVMe-only and have dedicated decompression hardware to feed their GPUs). So while in the past a three year wait would allow for for example a 100% increase in CUs/CUDA cores, a small bump in clock speeds and the same power draw at the same price, that isn't happening any longer. Mind you, that doesn't justify current GPU prices by any stretch of the imagination, but it does explain why generational gains are shrinking. It's a sign of maturing technologies. Hopefully increased competition this generation will drop prices a bit and keep them there though, as the current midrange and upper midrange cards are priced where high end and flagship cards used to be...
#135

XaledAre you focking serious? 1060 is THREE years older than 16xx's. In old days you could've get 100% performance for same price in such period.

FluffmeisterAh yes the $1500 face melting water cooled beast! The persuit of performance was fun back then, now people just like to get upset about things they don't intend on buying anyway.

Those cards were special, abberations. This card is a bog standard card.
#137

normally I would agree with you, but I think those days are gone now, moving forward after this bump will be 5% max gains on fps ends, but improving DLSS and RT and any other new gimmicks they come up with to keep us spending money and not worrying about the 5%.

Raytracing is new enough that we are about to see generation 1 from one team and gen 2 from Nvidia, it's still very new , generational leaps should be quite good for five years, but 12 years use of a 3090, you and him are having a laugh, no chance of it remaining useful.

No GPU would, it's not a slur against Nvidia to say such, it's a slur against them to imply they can't improve adequately in that time.
#138
Gtx 480 might have a succesor with respect to power drawn and heat outputed.
#139
I've been singing the same tune for several weeks.. if this power rumor us true (3 slot monster seems like that is coming true) amd doesn't stand a chance to compete with non titan flagship. Unless this silicon is completely borked, how does a new architecture and a die shrink at 300W+ compare against a new arch with a tweaked process? Remember 5700XT was 45% slower than a 2080ti. If ampere is 50% faster, then AMD needs to be ~100% faster to compete. We havent see a card come close, from any camp, ever. That saod, maybe its RTRT performance is where the big increase is... who knows.

So lomg as amd's card lands between them and is notably cheaper, it will be a win for everyone. But I just don't think rdna2 flagship will be within 15%.
#140
nvidia knows that this next year/18 month that pc gaming hardware will take a hit, they always do with the start of a new console cycle. as such they are going to try and cream as much margin off the top as they can.
#141

Minus InfinityStupid price, stupid size, stupid power consumption. Pathetically desperate effort from Nvidia to cling to the performance crown no matter what. Again so much time devoted to an ultra niche product only 0.01% of gamers will actually buy despite all the keyboard warriors claiming otherwise.

Desperate? High-end is what moves the market forward.

Neither price nor power consumption is confirmed at this point.
#142
It would seem a lot of people in this thread are confusing the RTX 3080 leaked a few weeks ago with this new 3090.

lexluthermiesterThat beast will not be going into my Dell T3500. It literally won't fit in physically. I'm sure it would work though. Might be time to build a new system... Been dragging my feet for almost a year anyway... I've settled on Threadripper, just trying to decide on which one..

They already screwed up the game there. 3000 series add a cherry on top of this.
#145
nvidia should just put GPU on the front CPU on the back of the PCB. and voila, not case needed. just a stand.
#146

Chrispy_It would seem a lot of people in this thread are confusing the RTX 3080 leaked a few weeks ago with this new 3090.

No, these are not the same card. Please stop posting leaked images of the 3080 and using it to claim things about the 3090.

Lol^ you are asking people to stop speculating in a thread that is entirely speculation. Why? nobody is claiming anything there is literally the word potential in the title. Relax and don't take it too seriously.
#147
I'll go back to sailing my boat while you guys talk it out.
#148
This card is going to be workstation oriented. I think it's just too big for most systems, plus those power requirements are going to be insane. I don't think all power supplies will play fair with this monster. I'll wait for the 3050 or 3060 series and see what they offer then. Something a little more reasonable.

It's cards like this that allow some crazy gaming, dont get me wrong. 4k gaming is wicked. But, we've seen where 4k gaming is headed at a dev-level with the Xbox and PS5. Pseudo 4k is the current future. The 3090 is likely to offer like a full 4k experience, but at an unreasonable cost. RDNA2 will probably win with cross platform optimizations on a more pedestrian and market-accessible product that comes in two consoles or your choice of AIB GPUs.
#149

saki630I guess im keeping my 1080ti or upgrading to 2080ti cuz nothing else will fit in this N1Case.