Moving up the ladder, the AB350-Gaming 3 is a gaming-grade board in the ATX form-factor, featuring a red+black color scheme. The board draws power from a combination of 24-pin ATX and 8-pin EPS power connectors; conditioning it for the CPU with a 7-phase VRM. The APU is wired to four DDR4 DIMM slots, and one PCI-Express 3.0 x16 slot. Other expansion slots include two x16 slots that are electrical x4, and two x1 slots. Storage connectivity includes one 32 Gb/s M.2 and six SATA 6 Gb/s ports (from which two are low-latency ports). Display outputs include DVI, DisplayPort, and HDMI. USB connectivity includes two USB 3.1 (10 Gb/s) ports, and six USB 3.0 ports. GIGABYTE deployed its gaming-grade AMPUp! onboard audio solution with a 115 dBA SNR CODEC, ground-layer isolation, audio-grade capacitors, a headphones amp, and gold-plated audio jacks. Network is care of an Intel-made gigabit Ethernet controller.

Moving further up is the AX370 Gaming K5, featuring Aorus branding. Based on the top-tier X370 chipset, the board features a 7-phase CPU VRM, using higher capacity ferrite-core chokes. The AM4 socket is wired to four reinforced DDR4 DIMM slots, and two PCI-Express 3.0 x16 slots (x8/x8 when both are populated). The third x16 slot is electrical x4. Three x1 slots make for the rest of the expansion area. Storage connectivity includes a 32 Gb/s M.2 slot, two 16 Gb/s SATA-Express ports, and eight SATA 6 Gb/s. Four USB 3.1 ports, six USB 3.0 ports, 8-channel AMPUp! onboard audio, and Intel gigabit Ethernet make for the rest of this board. The chipset heatsink features an RGB LED lighting element.

Leading the pack for GIGABYTE is the Aorus AX370 Gaming 5. This board has all the RGB LED lighting bells and whistles you'd expect from Aorus. The board features a stronger 10-phase CPU VRM. The expansion area is identical to that of the AX370 Gaming K5. Storage connectivity includes a 32 Gb/s M.2 slot, a 32 Gb/s U.2 port, two 16 Gb/s SATA-Express ports, and eight SATA 6 Gb/s ports. Four USB 3.1 ports (including type-C ports), eight USB 3.0 ports, Killer E2500 gigabit Ethernet, and AMPUp! audio make for the rest of it. 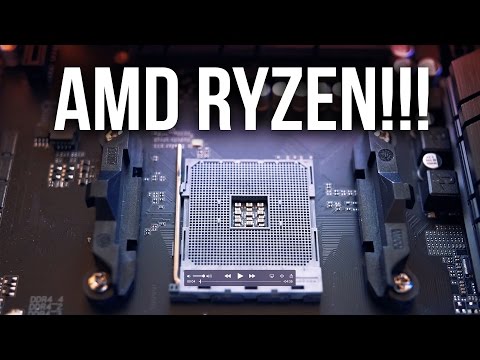 #4
i cant wait, then i can upgrade my 9370
#5
Why are we wasting ports on sataExpress????
#6
Yeah, if you could put the pictures in the order in which they're discussed, as opposed to in reverse order, that would be great.

So it's looking like the "Gaming K" SKUs are slightly lower-end versions of the "Gaming" SKUs in Gigabyte's Z270/X370 lineup. Considering the "K" ones have Intel ethernet and fewer LEDs, I'm thinking they should be the best value.
#7
Gimme, gimme, gimme :p:p:p
#8
I'm nota fan of gigabyte boards anymore. Are these the first AM4 boards announced?
#9
But will it Prime95 under AM4-variant of EK X360 for 4 or even 8 hours @ 4.5GHz on all 8c/16t? :) That 10 phase VRM Gaming 5 & the Gaming K5 should, 10 phase VRM in particular. Still hyped since the "New Horizon" event, thanx for a post regardless. Will you guys have these after CES is over? Cheers.

DeathtoGnomesI'm nota fan of gigabyte boards anymore. Are these the first AM4 boards announced?

Just wondering what made you change your mind on Gigabyte MBs? I have an old gen Gigabyte and not sure what theyre like these days.
Add your own comment
May 16th, 2022 02:20 EDT change timezone
Sign in / Register