Intel "Tiger Lake" and "Lakefield" to Launch Around September-October, 2020

by
btarunr
May 4th, 2020 21:57 Discuss (5 Comments)
The 11th generation Intel Core "Tiger Lake" mobile processor and pioneering "Lakefield" heterogenous x86 processor could debut around September or October, 2020, according to a leaked Lenovo internal slide posted by NotebookCheck. It also points to Intel denoting future processors' lithography with Foveros 3D Packaging as simply "3D," and not get into a nanometer number-game with AMD (which is now in 7 nm and on course to 5 nm in 2022). This makes sense as Foveros allows the combination of dies built on different silicon fabrication nodes.

"Tiger Lake" is still denoted as a 10 nm as it's a planar chip. Intel is developing it on a refined 10 nm+ silicon fabrication process, which apparently enables Intel to increase clock speeds without breaking the target power envelope. "Tiger Lake" sees the commercial debut of Intel's ambitious Xe graphics architecture as an iGPU solution. "Lakefield," on the other hand, is a 5-core processor combining four "Tremont" low power x86-64 cores with a "Sunny Cove" high-powered core, in a setup rivaling Arm big.LITTLE, enabling the next generation of mobile computing form-factors, which Intel and its partners are still figuring out under Project Athena.

5 Comments on Intel "Tiger Lake" and "Lakefield" to Launch Around September-October, 2020

#1
Are they ever gonna run out of lake terms?
Leaky Lake?
Moldy LAke?
Fishy Lake?
Barren Lake?
#2
To be precise, that comes from a leaked Lenovo ThinkPad product roadmap slide: 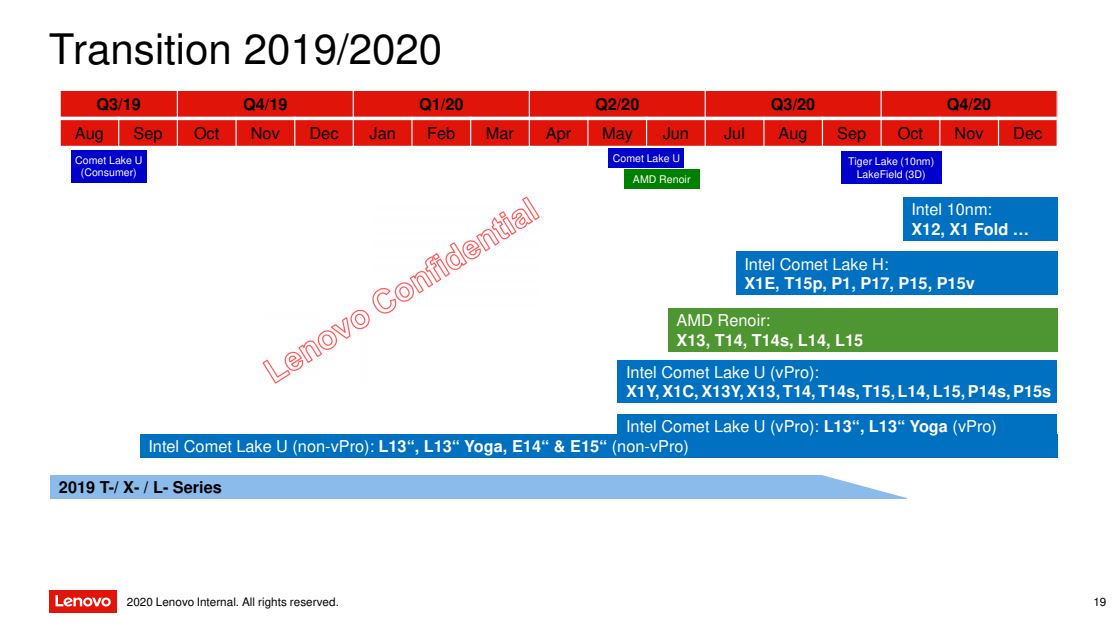 #3
I will be interested to see if this supposed 10nm+ is going to make a huge difference from the existing 10nm. To be honest, the current Intel 10nm is more like a 12nm, considering it seems to have regressed from the 14nm chips in terms of clockspeed and in some cases, base power requirement as well.

Lol. I think it should be called Polluted Lake since it is so power inefficient, eco unfriendly.
#4
tiger lake is around 40-46mm2 per quad core block Big core design +20% IPC, the remaining 100mm2 is occupied by thunderbolt/Xe Gfx/ controllers...
That makes it as power hungry as 150mm2 6-Core Coffe lake. Welcome to the 125 W TDP era. there is no coming back until 7, 5, 3nm.
compared to 76mm2 8-core chiplet Zen2, tiger lake is very similar in size per core ~10mm2. so Zen2 must be 11nm, not 7nm.
#5
So the 10th gen is going to be with us only for a few months before the 11th one replaces it. I can't imagine how the r&d behind these extremely short-lived generations is worth the costs.

On a buyer's perspective, Intel has more codenames on their roadmap than products on store shelves. Going with AMD gradually makes more and more sense.
Jun 28th, 2022 17:45 EDT change timezone
Sign in / Register