Word has been flying round the internet about Intel's dodgy Ivy Bridge DX11 'demo'. Intel's Mooly Eden, VP, PC Client Group was attempting to demonstrate a racing game on a prototype laptop - 'ultrabook' - fitted with an upcoming 22 nm Ivy Bridge processor with a racing wheel attached and allegedly rendering DX11 graphics. However, as is very apparent at the start, it's actually a video, because the control panel for the free VLC video player pops up for a few seconds. Eden then 'drives' a car and after a few seconds puts up one hand and then the other, because as he says "they are driving it from backstage". However, there was no one driving the game "backstage", as it was just a video and Eden doesn't say anything about this at any point in the presentation.

This gives conspiracy theorists lots of ammunition, as perhaps the game was actually played on a high powered desktop PC with NVIDIA or AMD discrete graphics cards? What game was it? Eden doesn't say. "IB can't really do these graphics!" they cry and so on. Sure, man 'didn't' go to the moon, either... However, we believe that while yes, there was a bit of deception going on, it was nothing more than a white(ish) lie. Why? Because Ivy Bridge comes out in April and people aren't going to forget this demo. They will immediately put IBs DX11 graphics to the test with similar games and if it doesn't deliver, Intel will have a lot of egg on its face. Here's what Intel had to say about this demo in an official statement:

We used a video in the DX11 Ivy Bridge-based Ultrabook demo simply for expediency at today's Intel press event at CES. We were extremely limited for time and didn't want to lose any time by getting in and out of the game. And Mooly told the audience this at the end of the demo… a couple of people have posted video of the demo on YouTube and you can hear Mooly say that the demo was driven by the folks behind the stage because he was limited for time and then went on to explain the DX11 support in Ivy Bridge.

We first demonstrated the DX11 feature of Ivy Bridge at IDF last September. It runs extremely well. The demo can easily be reproduced live for anyone who wants to see it. We'd be happy to show it to you and let you play DX11 games the next time you are in Santa Clara.

Well, whether one takes this statement at face value or not, the internet arena is a very unforgiving place and people don't like to be lied to, so the criticisms and conspiracy theories have been coming thick and fast, hence the best policy is total honesty in any presentation. Eden should have simply explained at the start that he was going to play a video demo for time/practicality purposes and no one would have batted an eyelid - this is Intel after all, not some unheard of company with no reputation and people would trust what was being explained to them. Probably the best thing that Intel could do right now to fix the fallout, is to give a real DX11 demo with that racing game, like they should have in the first place.

Note that this demo was actually preceded by a real time Havok render of a troll, as reported by AnandTech, which looked rather impressive.

Below, we have two high quality (720p/1080p) YouTube videos of the racing demo event, from different perspectives, to allow the reader to judge for themselves. The first one is courtesy of our source, IGN and the second posted by Bright Side of News.

Yesterday we reported Intel ran a video of a DX11 title instead of running the actual game itself on a live Ivy Bridge notebook during Mooly Eden's press conference. After the press conference Intel let me know that the demo was a late addition to the presentation and they didn't have time to set it up live but insisted that it worked. I believed Intel (I spent a lot of time with Ivy Bridge at the end of last year and saw no reason to believe that DX11 functionality was broken) but I needed definitive proof that there wasn't some issue that Intel was trying to deliberately hide. Intel promptly invited me to check out the demo live on an Ivy Bridge notebook which I just finished doing.

The notebook isn't the exact same one as used by Mooly Eden, but this alternative one certainly did show the game running on Intel HD Graphics 4000, which is what the embedded IGP in Ivy Bridge is called:


And finally, a video of the demo itself:


And as you can see, it's playing it just fine. There will no doubt be some great laptops based on Ivy Bridge and is certainly something to look forward to.

#1
Here's the thing though, why did Intel bother themselves to go trough all this trouble?
They could have just said: "Ivy Bridge's GPU can render/run DX11 games in ultrabooks."
Intel fanboys would be all like: "Oh yeah!" "Int3lz is the b35tz!!" "Take that AMD!"
The rest of us: "We will patiently wait for benchmarks."

AMD fanboys would probably just take what they have now and use it.
#2
Sweet, right now I live about 15 min. away from Santa Clara in Mountain View.... I should go there during lunch and ask to play.
#3
I'm fully willing to believe their new toy can play games that well, but that doesn't change the fact that this is still a very awkward, somewhat entertaining display of dishonesty. Hell, even if it had been convincing and we'd found out afterwards that it was a video I don't think it'd be getting as much attention as it is. It's only because the demonstration was such a metaphorical car crash from start to finish that this is spreading across the internet like wildfire.
#4
He could have just been honest about it to start with, instead of only admitting after falling over himself.

I'm still likely to buy IB when it's out as I'm confident it will be a winner, just like most people; which poses the question, why even pretend he's playing a game in the first place?
#5
Anand playing the live demo here
#6
If I recall correct, Ivy Bridge is being made on a 22nm process, not 28nm like its being stated in the first part of the article.

Apart from that, good article!

Noone likes being lied to, especially when the stakes (apparently) are as high as they are for this product, and they shouldnt just be allowed to get away with it.
#7
A-hem!

I would embed the vid but I don't know how...

... personally I couldn't give a rats about this 'fake' demo BS, I want to know more about what they're doing with the material from project Offset.
#8
Men went to the moon?

LC
#9
Intel make the best cpus, AMD make the best graphics and therefore the best fusion cpus.
#10
No demo would have been better than a fake. The racing wheel made it all the more epic.
If they wanted to show a video, of the capabilities they should of said so. :shadedshu:wtf:
#11
Either it can run it or it can't. This was a stupid idea on Intel's part. If isn't ready, pull an AMD and do paper launches. This just speaks that they are not confident in it. Now whether that is hardware related, or driver...still remains to be seen. My money would be on hardware, but you can't dismiss Intel's poor drivers either.
#12
I love how he used VLC lmao!

If your really bothered by this then you have a problem, companies play games like this all the time (pun not intended).
Proof will be in the pudding, sure its DX11 compatible but that doesnt mean it will run DX 11 games well does it? Im more interested in Ivy Bridge power usage.
#13

I would embed the vid but I don't know how... 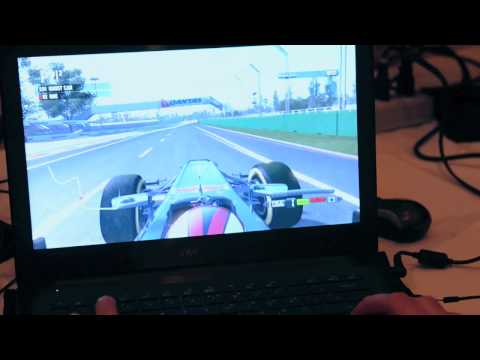 ... personally I couldn't give a rats about this 'fake' demo BS, I want to know more about what they're doing with the material from project Offset.

NC37Either it can run it or it can't. This was a stupid idea on Intel's part. If isn't ready, pull an AMD and do paper launches. This just speaks that they are not confident in it. Now whether that is hardware related, or driver...still remains to be seen. My money would be on hardware, but you can't dismiss Intel's poor drivers either.

The video above says it can.
#14
I like Gameranx's title for it (Intel: "OH GOD HOW DID THIS GET HERE I AM NOT GOOD WITH COMPUTER")
#15
with the lag at the begining looks like it could bearly play the video let alone the game.
#16

DigitalUKwith the lag at the begining looks like it could bearly play the video let alone the game.

It's hilarious when people can't read past the first post. I'll post it again. Just for you.

#17
i read all the posts ?? where did it say ivy bridge except in the title. the screen was white when he went to show the GPU that was running.
#18
New meme time (no I'm not posting it - it's ban-juice :laugh:)

DigitalUKi read all the posts ?? where did it say ivy bridge except in the title. the screen was white when he went to show the GPU that was running.

He said he was going to take a still at the end. I couldn't find it on Anandtech's site, but I only looked quickly. The uploader of the vid is someone from Anandtech.
#19
i think this is the link
#20
Yup.
www.anandtech.com/show/5359/intel-confirms-working-dx11-on-ivy-bridge


Damn! Just moments too late!
#21
VLC popup??? Didn't they planned, i mean, A BIT MORE :laugh:
#22
I guess Intel have not figured out how to make the drivers for the game properly by the DEMO deadline.

As long as what they showed is what the promise it is going to be then I do not see any issue with this.

Besides having trouble meeting the deadline.
#23
Mistakes happen at conventions all the time. I do think Intel should have clarified it was a video from the beginning and explained the whole time constraints thing. They clearly tried to be a little deceptive which is just wrong...
#24
the anandtech demo only featured 1 race car instead of actual race with multiple cars '__'
#25

xenocideMistakes happen at conventions all the time. I do think Intel should have clarified it was a video from the beginning and explained the whole time constraints thing. They clearly tried to be a little deceptive which is just wrong...

I suppose being deceptive is better than having nothing to show is better in that situation.
I recall nVidia and one of their cards being a false slap together which used wood screws back in the day so it's not unheard of.

I say it's a loss to them but not necessarily to use unless the person watching is a fanboi and it hurts THEM to see such failure on the manufacturers behalf.

Ultimately this is NOT the end result.

I personally have no allegiance to Intel or AMD.
I really hoped for Bulldozer to be a kick ass CPU but the ES showed otherwise so I posted that this is what we ARE going to get.
Of course this upset the fanbois, whenever I posted as such.

Best thing to do is not favor any brand, wait for the end result and choose which is the better within regards to bang for buck.:rockout:
Add your own comment
Jan 20th, 2021 18:09 EST change timezone
Sign in / Register