According to performance numbers put out by AMD, the Ryzen 9 3950X offers up to 22 percent higher single-threaded performance than the Ryzen 7 2700X as tested in Cinebench R20, and a whopping 79 percent higher multi-threaded performance than the Core i9-9900K. The company also claims gaming performance parity with the i9-9900K. The company also claims huge performance-per-Watt gains over the i9-9900K. Available for purchase from November 25, 2019, the Ryzen 9 3950X is priced at USD $749 (MSRP). The retail PIB box package lacks a cooling solution, and AMD recommends at least a 240 mm x 140 mm AIO liquid CPU cooler to go with this chip.

AMD also sealed the bottom end of its socket AM4 processor lineup with the new Athlon 3000G, which adds a few segment-first features. The 3000G is based on the 12 nm "Picasso" silicon that combines CPU cores based on the "Zen+" microarchitecture with an iGPU based on the "Vega" graphics architecture. The 3000G is configured with a 2-core/4-thread CPU and the Radeon Vega 3 onboard graphics that has 3 "Vega" NGCUs. The CPU is clocked at 3.50 GHz, which is a 300 MHz gain over the Athlon 200GE. This time around, AMD has also provided an unlocked base-clock multiplier for the CPU, letting you overclock it. The Radeon Vega 3 iGPU is configured with 192 stream processors, and 1100 MHz engine clock, a 100 MHz gain over that of the 200GE. Available for purchase from November 19, 2019, the Athlon 3000G is priced at just USD $49, and could make for an entertaining little toy for enthusiasts, as well as a formidable chip for home-theater, NAS, or other low-power desktop builds.

Moving on to the most exciting part of the day's announcements, AMD unveiled its 3rd generation Ryzen Threadripper high-end desktop (HEDT) processor series, debuting with two models, the Threadripper 3960X and the Threadripper 3970X. The two are based on the new sTRX4 CPU socket, and are being launched alongside the new AMD TRX40 chipset. The socket itself looks physically similar to the older TR4 socket, and offers cooler compatibility, meaning that any CPU cooler or water-block that's compatible with TR4 will be compatible with sTRX4 as well. Your only consideration should be the cooler's thermal load capacity, as both the processors being announced today have a TDP rating of 280 W. The 3rd gen Ryzen processors themselves have no backwards-compatibility with older AMD X399 chipset motherboards, nor would older Threadrippers work on TRX40 chipset motherboards.

Interestingly, AMD has launched no HEDT chips priced under $1000 this time around, which is where Intel retreated its 10th generation Core X lineup to. AMD says that its 2nd generation Ryzen Threadripper chips are still competitive with Intel's HEDT chips, and suggested that consumers to pick up those chips instead. We interpret this as AMD preparing a round of price-cuts to 2nd gen Threadrippers already in the market, and possibly getting its motherboard partners to do the same with their X399 motherboards.

The 3rd generation Ryzen Threadripper is a derivative of the company's "Rome" multi-chip module, featuring five chips - four 7 nm "Zen 2" 8-core CPU chiplets (or CCDs), and one 14 nm I/O Controller die (or ICOD). The four CCDs talk to the ICOD over the Infinity Fabric interconnect, which has doubled in bandwidth over the previous generation. The ICOD on the sTRX4 Threadrippers are configured with a monolithic quad-channel DDR4 memory interface that supports up to 2 TB of memory, including ECC support.

The PCI-Express root-complex of the 3rd generation Ryzen Threadripper is massive, and fascinating. It puts out a total of 64 PCI-Express gen 4.0 lanes, wired out as follows:As described in the list above, the move to bolster chipset-bus with PCI-Express 4.0 x8, quadrupling bandwidth over the previous generation TR4 platform (which uses PCI-Express 3.0 x4), is probably one of the reasons AMD had to come up with a new CPU socket.

The AMD TRX40 chipset is physically similar to the X570 and is designed in-house by AMD for GlobalFoundries 12 nm FinFET node. Its PCI-Express gen 4.0 switch is configured differently to accommodate the wider x8 chipset-bus. The TRX40's PCIe budget is laid out as follows.For a motherboard that has at least four SATA 6 Gbps ports, the TRX40 chipset hence effectively puts out 12 downstream PCIe gen 4.0 lanes.

Lastly, AMD announced a fascinating new platform feature called ECO Mode. Applicable to all socket AM4 processors that have "Zen 2" CPU cores (Ryzen 5 3500 and above), ECO Mode is essentially a cTDP (configurable TDP) implementation for the desktop platform. You flick a toggle in Ryzen Master, and the processor's TDP is capped at 65 Watts on-the-fly. So when not gaming or doing serious work, you can turn on ECO Mode and ensure your processor never draws more than 65 Watts. For the mighty Ryzen 9 3950X, ECO Mode offers 77 percent performance, but 44 percent lower power-draw, and 7°C lower temperatures.

It will be nice to read through the reviews when they get released. I just feels good to see that AMD is back in the game after all these years of playing catch up.
#4
Reviews plz. Also, will there be such a thing as a 3990WX? I liked the WX name.
#5

FrickReviews plz. Also, will there be such a thing as a 3990WX? I liked the WX name.

Probably for the price of a decent used car.
#6
@phill there we go :D
now I just need availability in my local shops
#7
Lets see how much power consumption and temps jump on 3950x stress testing and if they can achieve sustained boost clocks. And also if it can melt the promoted A320 and B350 boards :)
#8
+ 600 dollars for 8 more cores when comparing 3970X and 3960X is just a HUGE SCAM considering 3700X cost 330 dollars ( that's including the substrate , IMC die , IHS , reatail package , margins etc etc ) ! AMD deserves a lot of credit but they also deserve a lot of flak when they do things like this ......
#9

Are we also forgetting that you get 64 PCI-E lanes, 2 more memory channels, and a host of other features for those $600 extra dollars?
#10
With no competition from Intel they can set their prices where they want...

Over the last two years as the main competitors push their prices up AMD has been going with the flow to capitalizes on this (examples: Vega 64, RX 590, RX 5700 XT and most likely RX 5500). All those products should have launched $50-$100 less but because of lack of competition Nvidia and Intel got to determine the goal posts.

Now that AMD is on top with Threadripper, it gets to act as it's other competitors. Personally this is bad in my opinion and I forsee the enthusiast PC space getting smaller in the next few years as regular folks get priced out of the market, shrinking the high end gaming PC market, and causing developers to once again prioritize consoles and have bad PC ports.
#11

Lorec@phill there we go :D
now I just need availability in my local shops

Amazing news!! I cannot wait for the reviews on these CPUs!!
#12
I wouldn't call Threadrippers, desktop processors. Nobody needs that many threads to run Firefox or Office. These are proper workstation CPUs. And impressive ones at that.
#13

bugI wouldn't call Threadrippers, desktop processors. Nobody needs that many threads to run Firefox or Office. These are proper workstation CPUs. And impressive ones at that.

While that may be true, the average news commenter only sees these products for their use cases. :roll:
#14

SlizzoAre we also forgetting that you get 64 PCI-E lanes, 2 more memory channels, and a host of other features for those $600 extra dollars?

TheLostSwedeConsidering it's Zen+, B450 is plenty fine...

SlizzoAre we also forgetting that you get 64 PCI-E lanes, 2 more memory channels, and a host of other features for those $600 extra dollars?

Also, giving AMD flak for a 32c/64t when Intel has been charging (per core) insanely more for essentially forever? Could it be cheaper? Likely, but it completely smashes the pricing scam Intel has been stiffing consumers with for ages.
#17

NordicWhile that may be true, the average news commenter only sees these products for their use cases. :roll:

Plus, there should be a penalty for lumping the 3000G together with 3970X. Like death or even something harsh :D
#18
Is Intel actually better price/perf ration than AMD? 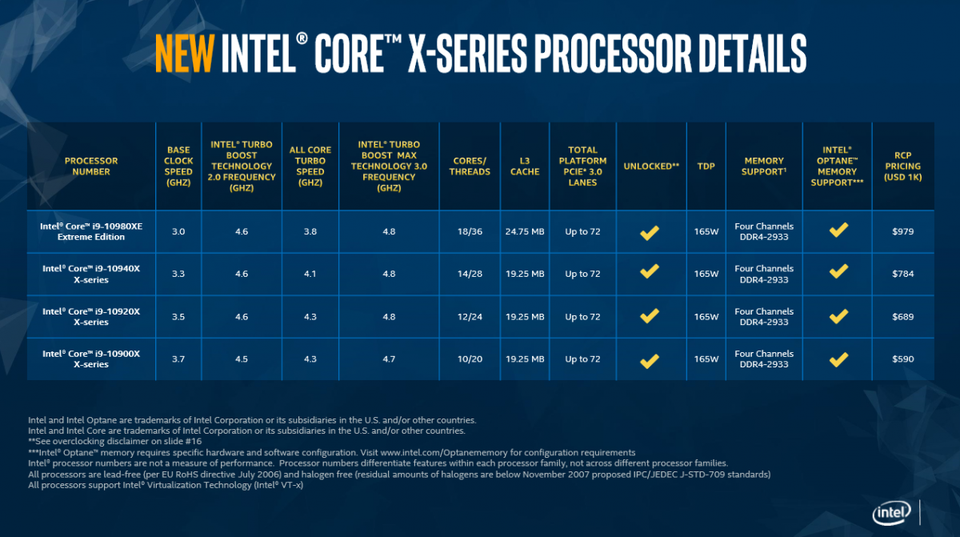 Very disappointed in 3rd gen. Threadripper pricing. I will not be adopting this platform right out of the gate as I have with previous HEDT platforms. If AMD releases a 64-core SKU and adjusts their pricing, I will reconsider.

I get it, these are the highest core-count HEDT chips on the market right now and Intel doesn't appear to have anything that can compete in well-threaded workloads outside of the monstrous W-3175x which carries its own monstrous price tag. These chips carry a price premium, and it is justifiable in large part. However, as a current X299 owner I am not prepared to drop another $2500-$3000 simply to double my core count, and see a less than linear performance improvement in the majority of workloads. The value proposition is not there, for me.
#20

Either everything is a scam or people will spend the money on the CPU that best suits their need. It's not like there is false or deceptive advertising or they are forced to buy AMD at gun point. You really need to adjust your outrage meter to normal, non-internet levels.

How does the 3950x on AM4 get that many PCIe lanes? Are you counting the X570 chipset in there as well? AM4 CPUs generally only have 16+4+4 (with some APUs even less I think).
#21
When 18C from Intel cost $2000 until now and Intel is forced to sell the same thing renamed for half of it, AMD is already leading the HEDT market. So, they can easily sell a 32C that is on average 50% faster for double the 18C from Intel, especially when the 3950X is comparable to Intel's 18C in perfromance being much cheaper when included the platform's cost.AMD has chosen to sell normal desktop CPUs for more than sensible prices for their performance and will charge a lot (but still close to Intel's $/core cost although AMD is faster now) for the Threadripper Zen2 CPUs since they don't have any competition at all. Very smart financial and marketing tactics from AMD imho.
#22
I don't want the 3rd gen Threadripper. I want that R9 3950X!
#23

Either everything is a scam or people will spend the money on the CPU that best suits their need. It's not like there is false or deceptive advertising or they are forced to buy AMD at gun point. You really need to adjust your outrage meter to normal, non-internet levels.

From what I've read/seen, it's going to be specific X570 boards that have this many lanes available, unlikely that every X570 board will have/support them.
#24
But I want 64 cores, where are my 64 cores:cry:...

Yikes threadripper cost a pretty penny. Guess AMD is now doing what Intel dit before and TRX40 boards is not gonna be cheap either. Leaked prices motherboards at 500 and 900 USD. So lest say 500 USD for a TRX40 board and 1399 USD for cpu + cooling solution and memory. Not a cheap upgrade:fear:.

Intels line up is not that existing either. Same old 14 NM rebranding bullshit and 10980XE is also a round 250 USD more expensive than ryzen 9 3950X.

So yeah I have talk about it for long now. But I can now say for sure. Ryzen 9 3950X with a good X570 board is what will replace my old Intel X58/I7 980X setup. Threadripper is over my budget and intels offer is the same boring rebrand 14 nm.

So I better get my greasy hands in a 3950X as soon as possible. Can't wait for an upgrade:D. But I hope a NOCTUA NH-D15 can keep this thing cool as amd recommend an AIO. It's just i am not a fan of water cooling.
#25
DROOLS over them TR parts. But that Athlon looks mighty interesting also for my youngest grand child.
Add your own comment
Jan 21st, 2021 07:28 EST change timezone
Sign in / Register